In the last couple of months America has witnessed a horror of mass shootings, from a grocery store in Buffalo, New York, an elementary school in Uvalde, Texas, and now a Fourth of July parade in Highland Park, Illinois.

Gallup has been tracking opinions on gun control in the U.S. for over 30 years. In this blog, we take a look at Americans’ views of gun violence and what they want to see in gun legislation.

Even before the recent rise in gun violence and spate of mass shootings, the majority of Americans (61%) said they were worried about the availability of guns, and half (48%) were worried that they or a family member might become the victim of a mass shooting.

Who and what they blame for mass shootings
While Americans attribute the rise in mass shootings to a number of factors, they are most likely to blame it on:

Americans overwhelmingly support background checks for all gun sales and red flag laws that prohibit people from buying guns if they are deemed to be a danger to themselves or others.

The majority of Americans also support a 30 day waiting period for all gun sales, raising the legal age from 18 to 21, and a ban on assault rifles.

They draw the line at handguns, with only one in four Americans saying that handguns should be banned.

Discussion
The gun safety legislation that Congress just passed addresses some concerns (especially related to mental health and red flag laws) but still falls far short of what most Americans want. A survey published this month by Pew Research Center found that eight in ten Americans (78%) think that the new gun law will do little or nothing at all to reduce gun violence.

Americans are increasingly living in fear of gun violence and want Congress to take more decisive and aggressive action to reduce access to guns. Six in ten adults (63%) say that they would like Congress to pass another round of legislation to address gun violence. Indeed, the vast majority of registered voters (85%) say that they consider a candidate’s gun control policy when deciding who to vote for. 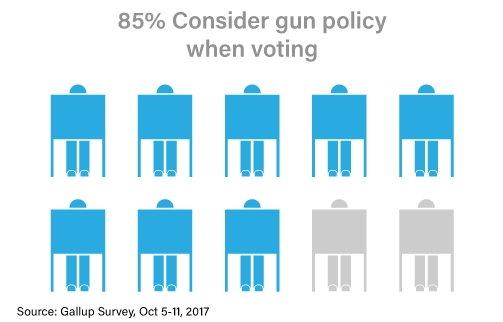 The tragedy is that if Congress had already passed the kind of gun control legislation that Americans want, it is very possible, even probable, that Buffalo, Uvalde, Highland Park, and so many other mass shootings could have been prevented.

Join us as we discover and discuss the latest in market research and the stories behind the
data.